Showing posts from October, 2013
Show all

By Brian - October 29, 2013
Do you find yourself always asking God for something? Do you ever engage in conversation with God? I think most people would say that when they talk to God, they are usually asking for something. God wants us to fully rely on Him. Think about your relationship with your most trusted confidant. Do you only talk to them when you have something to ask for? Of course not. You have normal, confidential conversations. Why not talk to God in that manner as well? He is always there to listen. He is the most trusted friend you could ever have. He will not tell anyone your situation or your problems. Most of us fail to do this. We want God to send the answer but we don't talk to Him about what is going on. When we do decide to pray and talk to God, mostly asking for something in return, we finish and go on about our business. God wants us to talk to him and then let Him talk to us. I suggest that after you are done praying, be silent and still, wait for Him to answer or talk to you. He wil…
Post a Comment
Read more 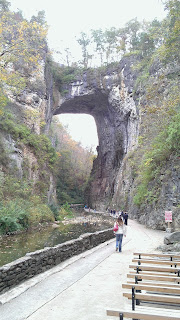 There are many people that question whether or not there is a God. They wonder how God, if there is one, could allow things that go on in the world. They don't understand that God has given us free will and he can't make us choose to go down the right path. He never leaves us or forsakes us. He is always there trying to get us to follow Him. God is constantly pulling on our heart strings so that we will give into Him. He puts us in certain situations hoping that we will see Him as the only way out. God's intention is to NOT lose a single one of us. A little over a week ago, I went to West Virginia for my grandmother's funeral. It was a very sad time as you can imagine. It was a big pill to swallow for me. I just went through the death of my dad back in August. My dad's death really took a toll on my soul and my heart. I still have not even began to process it and I don't think that I will ever be able to "deal" with it. On the way back from West Virg…
Post a Comment
Read more

Come as you are

By Brian - October 24, 2013
Luke 5:8-11
But when Simon Peter saw it, he fell down at Jesus' knees, saying, "depart from me, for I am a sinful man, oh Lord." For he and all who were with him were astonished at the catch of fish they had taken, and so also were James and John, sons of Zebedee, who were partners with Simon. And Jesus said to Simon, "Do not be afraid; from now on you will be catching men." And when they had brought their boats to land, they left everything and followed Him!

5:8-9
Simon's reaction is a natural response to God himself appearing to man. Although Simon did not realize exactly who Jesus was at the time, he knew that Jesus had been sent by God because no one else could perform such a miracle. He fell down at Jesus' knees in the midst of the fish asking the Lord to depart from him, so that he would not be judged as a sinful man. He felt himself in the presence of God and did not feel "good enough" to be…
Post a Comment
Read more

Grace in time of need

By Brian - October 20, 2013
Hebrews 4:14-16:
Since then we have a great high priest who has passed through the heavens, Jesus, the Son of God, let us hold fast our confession. For we do not have a high priest who is unable to sympathize with our weaknesses, but one who in every respect has been tempted as we are , yet without sin. Let us then with confidence draw near to the throne of grace, that we may receive mercy and find grace to help in time of need.


We all go through trials in life. We have bad times that can bring us down. We struggle with a lot of worldly evils. There are temptations knocking on the door every way we turn. It can be hard to endure and especially to overcome. This is an even greater feeling during times when it seems that the whole world is against us and the problems just keep piling up. Actually, the world is against us. The ruler of this world, the devil, has his army set out to destroy the church and destroy God's people. We have to hold tightly to our faith and believe that God w…
Post a Comment
Read more
More posts