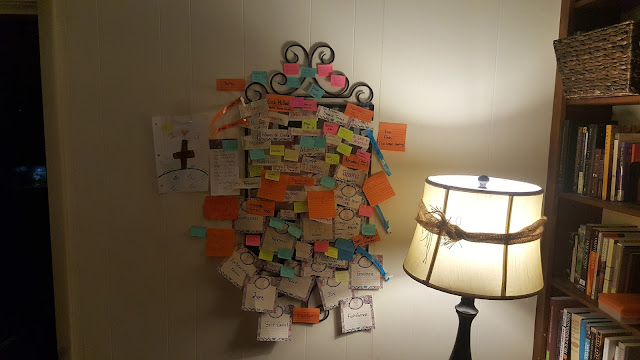 This prayer wall has been powerful and effective. We started it with the fruit of the Spirit and later felt led to add a name to the wall. The first name was of a lady that had to have a quadruple bypass surgery. First, doctors said she was not healthy enough for the surgery. After two days on the prayer wall, the doctors performed the surgery. Her family was told she would be in ICU for two weeks. Three days later, she was in a regular hospital room. Then, doctors said she would be in the hospital for at least a month. Two weeks later, she was fully recovered and back at home.

God has blessed this Prayer Wall and I know He will do the same for you. I encourage you to start your own Prayer Wall today!

Our Prayer Wall has grown into an entire chalkboard, wall! Praise God! 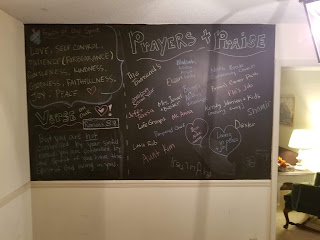 Popular posts from this blog

When God's Love Annoys Us

By Brian - February 28, 2017
Jonah 4:2: He prayed to the LORD, 'Isn't this what I said, LORD, when I was still at home? That is what I tried to forestall by fleeing to Tarshish. I knew that you are a gracious and compassionate God, slow to anger and abounding in love, a God who relents from sending calamity'" (NIV).

My family and I were discussing the story of Jonah last night. As we discussed the story, we noticed how much hatred Jonah had towards the people of Nineveh. By nature, Jonah had every right to feel the way he did. The Ninevites had been repulsively brutal in the treatment of the Jewish people. The Ninevites were a ruthless people whom showed no mercy on and had no respect for human life. There are stories from history that describe how the soldiers of Nineveh stacked the decapitated heads of their victims' corpses in shapes of pyramids as a symbol of victory to themselves and as a message to their enemies. There are incidents where the skins of human flesh were peeled off as a t…
Read more

By Brian - March 02, 2017
John 19:32-35: "The soldiers therefore came and broke the legs of the first man who had been crucified with Jesus, and then those of the other. But when they came to Jesus and found that he was already dead, they did not break his legs. Instead, one of the soldiers pierced Jesus' side with a spear, bringing a sudden flow of blood and water. The man who saw it has given testimony, and his testimony is true. He knows that he tells the truth, and he testifies so that you also may believe" (NIV).


As part of our decision to remember all that Jesus accomplished on our behalf, as we approach Resurrection Sunday, my family and I discussed this passage of Scripture last night. We wondered why God put this piece of information in the Bible. Was it just to fulfill Scripture? Or, could there be more to it? This passage contains some pretty gross, descriptive language. The writer could have stopped by stating "the soldiers pierced Jesus' side with a spear". Why did he g…
Read more